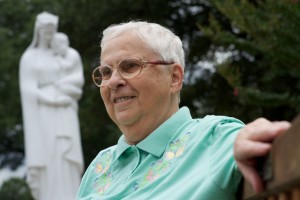 St. Mary’s Home honors a remarkable woman who was the source of comfort and strength for many as she devoted her life to helping children, especially those with severe disabilities.

Sister Mary June Morin, a member of the Daughters of Wisdom religious order, cared for and cherished thousands of children during more than five decades of service at St. Mary’s. She passed away on Friday, Feb. 7, 2014, at Bon Secours Maryview Medical Center after a short time at the Portsmouth hospital. She was 80.

A Christian wake service was held Feb. 14, 2014, at Foster Funeral Home in Portsmouth, followed by a funeral Mass the next day at St. Mary’s Home. Read Sister’s obituary here.

“This beautiful woman of God represented the very soul of St. Mary’s Home,” said William C. Giermak, CEO of St. Mary’s, which provides care in a homelike setting for children and young adults with disabilities. 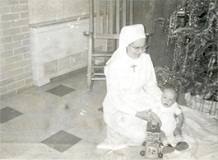 Sister Mary June was just 26 when she took a train from New York to Norfolk on Feb. 8, 1960, to begin working at what was then called St. Mary’s Infant Home. When she retired exactly 51 years later, on Feb. 8, 2011, she was the last nun on the staff of the private, nonprofit, nonsectarian Home, as well as St. Mary’s longest-serving employee.

Many people asked Sister over the years how she had the strength to work with children with such severe disabilities. Her response was typical of Sister’s matter-of-fact attitude: “You say to yourself, ‘These are children. They need your care. Why not give them the best care to help them reach their potential?'” 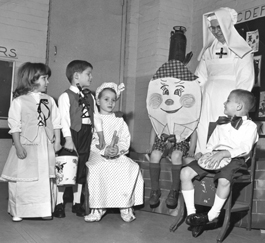 Even in retirement, she continued to visit St. Mary’s as often as a couple of times a week to volunteer, putting notebooks about the Home’s history in order and helping St. Mary’s seamstress, Luzviminda David, care for the children’s clothing.

In November 2011, Sister was honored for her long service to children by the Knights of Peter Claver & Ladies Auxiliary Barrett-Newell Council & Court #279. She was presented with the Excellence in Claver Award for Service in the Private Sector.

Sister Mary June was born on March 24, 1933, the third-youngest of 12 siblings in a French-Acadian family in the northern Maine town of Madawaska. Her mother, Melvina, took care of the family. Her father, Charles, who emigrated from Quebec, Canada, was a blacksmith and paper mill worker. The family always spoke French at home, and Sister maintained her French accent as an adult. 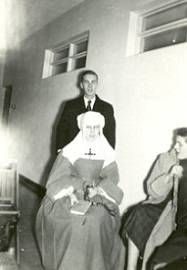 Sister was a tomboy who was involved in a lot of sports. She had one nun as a teacher, a member of the Daughters of Wisdom who taught the sixth grade. Sister Mary June said that from the sixth grade, she knew God had called her to the religious life.

In July 1951, a month after finishing her senior year at Madawaska High School – her class was the first to graduate from there – Sister went to Connecticut for initial religious training. She took her first vows as a Daughter of Wisdom on Feb. 2, 1953.

Her first work assignment was to St. Charles Clinic, a children’s clinic in Brooklyn, N.Y. She and two other nuns cooked for the children, nuns, doctors and a priest.

Then the Daughters of Wisdom sent her to St. Mary’s because, she said, “the need was here.” At the time, there were 21 nuns at St. Mary’s, which had opened in December 1944 in a century-old school building in downtown Norfolk to care for children left unattended when their fathers went to war and their mothers went to work to make ends meet. Sister recalled that the building had very high ceilings and interior walls painted dark gray by military servicemen using surplus paint. 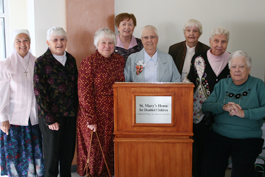 Sister Mary June initially did laundry and mended clothes at St. Mary’s. She spent the ensuing decades working, as she liked to put it, “in all the corners of St. Mary’s,” from taking care of toddlers and acting as a nurse’s aide, to teaching art and Montessori school, to arranging activities and field trips.

She remembered going with children to the circus and the beach and getting up in the middle of the night to take sick children to the hospital. One morning on the way to chapel, she noticed Twinkle, a dog who lived at the Home, staring out a window. Curious, Sister looked out the window and saw a cardboard box on the doorstep. Inside the box was a baby girl. 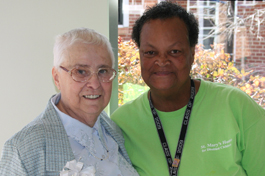 Sister remained with St. Mary’s as the Home moved into a new building in the 1960s and then into the current spacious, light-filled facility, which opened in 2005 near Sentara Leigh Hospital. She saw St. Mary’s evolve into a long-term residential center filled with nurses, therapists, teachers and other staff who care for children and young adults with severe to profound disabilities.

Sister was especially drawn to the children who needed the most care. One of those children was Tommy; she fondly called him “my baby” even as he grew to young adulthood. As an infant, he was considered a “failure to thrive,” but she patiently coaxed him to eat. Tommy, who recently moved into The Albero House, St. Mary’s new wing for adults, came to learn the sound of her footsteps – a sound that made him break into a wide smile. 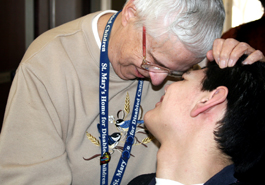 As she approached her 50th anniversary at St. Mary’s, Sister remarked, “If you want to stay young, work at St. Mary’s. The children have a lot to teach you.”

Melanie Pérez-López, St. Mary’s director of social work, said Sister worked hard with the children to help them exceed expectations. “She had a sense, right from the point of admission, of what each child is capable.”

For years, Sister and Shirley Parham, a longtime member of the activities staff, decorated the Home with care at the holidays. Sister also was known for her sense of humor; she loved to dress up in funny costumes for Halloween and once played a practical joke on staff by coming to work in a wig and pretending to be someone else.

Kathy Brobst, St. Mary’s community outreach coordinator, recalled being a bit intimidated by Sister when they first met. But that quickly turned to deep respect, admiration, affection and love.

“Her loss will leave a hole at the Home that can never be filled by anyone else,” Brobst said.

Interview in The Virginian-Pilot, 2011