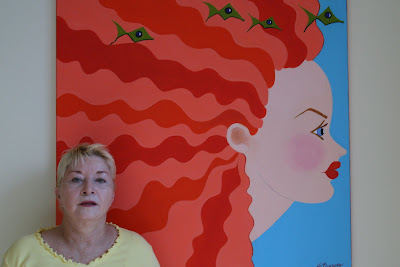 Shirley Burnette with one of her paintings newly installed at St. Mary’s Home.

Once-bare walls of St. Mary’s Home for Disabled Children now are lively with bright paintings by Virginia Beach artist Shirley Burnette. Each wing has a different theme, such as the seashore or flowers. Burnette visited the Home today to display her newest paintings, designed around a mermaid theme.

Before becoming an artist, Burnette was a visual manager at several department stores, working on window displays and flower arrangements, and shaping the stores’ overall atmosphere. During her time spent as a visual manager, she began painting murals for local businesses.

Burnette’s first mural was of the New York City skyline, for a diner in Virginia Beach. “After painting this mural I thought, ‘Hey, I could actually make this work,’ ” Burnette said about her realization that she had talent as a painter. 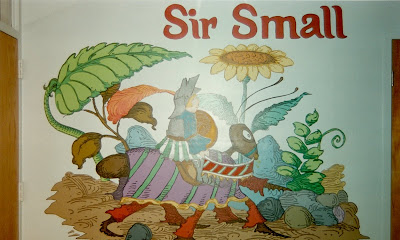 One of Burnette’s murals at the old St. Mary’s Home. (file photo)

She originally painted murals for St. Mary’s Home in the early 1990s, at its old location in downtown Norfolk. Ann Sparkman, St. Mary’s director of medical records, had called the store where Burnette was working at the time to ask whether the store could donate used displays. Burnette couldn’t donate the displays, but she offered to paint murals in her free time.

St. Mary’s moved to its current location about five years ago. Burnette recently volunteered her time and talent to decorate the halls. The parents of a child who used to live at St. Mary’s Home paid for the materials.

This time, Burnette is working on canvas. While the artwork has different themes, the paintings tie together through their playful style and vivid colors, which give the Home a more personal touch. Each painting is 3 feet by 3 feet – large enough so the children can easily see the colors and images. Burnette has decorated three wings of the Home so far and has plans to continue with a new jungle series.