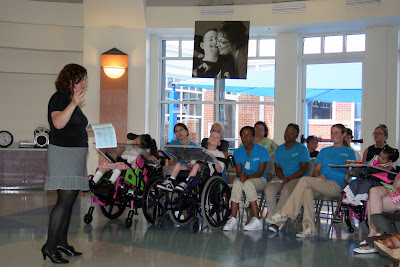 Five years ago, Lisa Suhay told the story of Norfolk’s mermaid statues in her children’s book, “There Goes a Mermaid! A NorFolktale.” But the story didn’t end there, as Norfolk’s mermaid population has continued to grow right up until this officially proclaimed “Year of the Mermaid” — which began Sunday with an event at St. Mary’s Home for Disabled Children.
About 60 residents, family members, staff and friends of the Home gathered in the Atrium to celebrate the release of a special revised edition of Suhay’s book, which includes some of the “new girls in town” and a page all about SMHDC. The special printing honors the fifth anniversary of the original book, the 10th anniversary of the mermaid as Norfolk’s symbol and the upcoming 65th anniversary of St. Mary’s Home.
Suhay read — actually, gave a wonderful performance of — her book and signed copies of it. She is donating part of the book’s proceeds to SMHDC and The Virginian-Pilot’s Joy Fund. “Lisa has been a real friend to St. Mary’s,” CEO William C. Giermak said of Suhay, who also spoke at the Home’s graduation ceremony in May.
Bob Batcher, public relations manager for the City of Norfolk, read a proclamation issued by Norfolk Mayor Paul D. Fraim. The proclamation honors St. Mary’s Home and declares July 2009-2010 to be the “Year of the Mermaid” in Norfolk.
St. Mary’s Home, which cares for children with severe disabilities from Norfolk as well as from throughout Virginia, exemplifies the city’s slogan of “Life. Celebrated Daily,” Batcher said. “Every day there is something here to celebrate,” he said.
Special guest former Miss Norfolk Amanda Batcher, Batcher’s daughter, sang “God Bless America” to open the program and closed out the event with a touching rendition of “Over the Rainbow.”
Also on hand for the event were Debbie Bellucci from The Joy Fund and “Mermaid Mama” Georgia Mason, who has created many of Norfolk’s mermaids and now is working on one for the children of St. Mary’s Home.