Friday was a day to celebrate Josh and Maurice, two young men who live at St. Mary’s Home, and to reflect on how far they have come as they prepare for their future.

“For most of us, living is relatively easy. We get up in the morning and get dressed and drive to work,” special educator Judith Green said during her keynote speech at the graduation ceremony for St. Mary’s Class of 2011.

“For Maurice and Joshua, it is not easy,” said Green, director of Southeastern Cooperative Educational Programs, or SECEP. “They have struggled to live, they have to depend on others, and they have fought hard to get where they are today.”

Every child and young adult at St. Mary’s attends classes, either at the Home through a partnership with SECEP or at Norfolk and Virginia Beach public schools. Graduation signals the end of formal education for young people who are 21 or will turn 21 in the next year. Currently, young adults must find other living arrangements, such as group homes, before they turn 22, although St. Mary’s is planning to open an adult wing in 2012.

Families, guardians, staff, friends and other residents gathered in the Atrium for this year’s ceremony, which began with four of the younger children presenting colors and also included a video tribute featuring photos of the two graduates through the years.

The caregivers and teachers who knew the graduates the best shared a bit about them. “You haven’t really experienced St. Mary’s until you’ve met Maurice,”  who loves to sing and dance, said teacher Kimberley Curll; as if to prove her point, he smiled and vocalized and gestured exuberantly through much of the ceremony.

Nancy Bryan gave the family tribute. She said her son Josh has been a blessing and has  taught her to “learn to appreciate the small victories.” She also thanked the staff at St. Mary’s Home for taking good care of him.

Before the keynote speech, St. Mary’s CEO William C. Giermak noted that Green is retiring this year and said the Home was honored to have one of her last official acts be to speak at commencement.

Earlier Friday, the teaching staff presented Terry Lyle with a paver in her honor to celebrate her 10th anniversary as principal of  SECEP REACH (Raising  Expectations and Abilities for Children with Complex Health Needs). The paver has been placed along the walkway at St. Mary’s entrance. 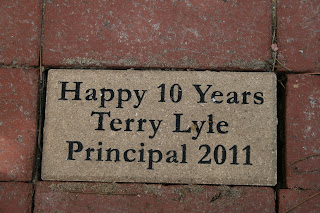