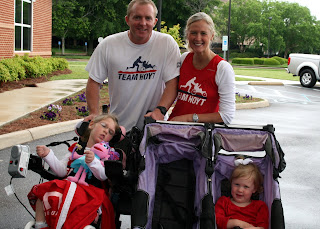 As Team Hoyt VB’s members readied for a fun run at St. Mary’s Home on Saturday, they wondered if Mother Nature would smile on them. Despite earlier showers and clouds in the distance, 15 joggers/walkers and a dozen children in jogger strollers made half-mile laps around St. Mary’s property with laughs, smiles, squeals of joy and even a few claps. A few gentle raindrops felt refreshing, and the sun came out just in time for a final group picture.

Team Hoyt VB formed in April 2008 with the same goal as the national father-and-son Team Hoyt: to integrate the physically challenged into everyday life. This local group of Team Hoyt supporters embrace that spirit wholeheartedly. They go the extra mile to make the running events happen, loading as many as 25+ jogger strollers on multiple vehicles to reach the starting line. Frank Lloyd Wright once said, “The thing always happens that you really believe in; and the belief in a thing makes it happen.” That message rings true with this enthusiastic group.

Look for Team Hoyt VB at these  upcoming races: CHKD 8K on June 13, Allen Stone Memorial on July 18, Surfers Healing on August 22, Rock ‘n’ Roll Half Marathon on September 6 and finishing the season with St. Mary’s 5K fundraiser on October 3 at .