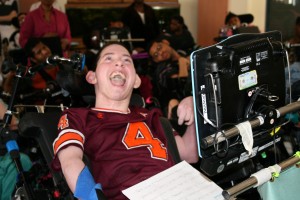 Brandon is amused by a witness's statement.

Jurors were just about to deliver their verdict when a cry of “Wait! Wait! I have evidence!” rang through the courtroom.

Crystal Anderson, food production manager at St. Mary’s Home, had something important to show Judge Mercedez, the jurors and spectators: a video from the crime scene that would prove the innocence of defendants Brandon, Nathaniel G. and Patricia and bring the case of the purloined pudding to a dramatic close.

The trial was the culmination of a school exercise that helped St. Mary’s students in the classrooms of teachers Erin Keech, Kim Curll and Nichole Watson practice the writing process during the month of January.

The students were given a fictional scenario: The children and young adults who live at St. Mary’s were getting ready for bed when suddenly, there was a loud crash. Staff ran to the Atrium to investigate and found brown tracks, a tray from the kitchen and some empty chocolate pudding containers on the floor. Following the tracks, they discovered a few more empty pudding containers and a small cup that used to be filled with milk. 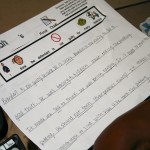 The students were assigned roles based on the scenario and given tasks, such as writing witness statements. The exercise taught them to select a topic or event and use drawing, dictating or writing to compose a message about it, use technology to produce and publish writing, and select a text and write an opinion about it, incorporating one reason to support the opinion.

Then, on Jan. 31, students and staff assembled in St. Mary’s Atrium (also known as District Superior Court). Students whose disabilities make it difficult for them to speak pressed buttons on their communication devices to play recordings of their written statements. Occasionally, the judge had to press her own device to admonish the crowd: “Order in the court!”

Carrington, a star witness for the prosecution, pointed out that Brandon had been on his way to get some pudding for Amelia. But defense witness Koko countered that Brandon would not steal chocolate pudding because his favorite flavor is vanilla. Isaiah added that Brandon is too noisy to be a thief, and then, with a big smile, joked, “I am guilty,” causing the courtroom to erupt into laughter. 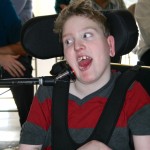 Brandon suggested that Isaiah actually did take the pudding because he saw chocolate pudding on Isaiah’s sneakers, while Nathaniel defended himself by explaining that he was asleep when the pudding went missing. Patricia was unable to attend the trial and therefore was tried in absentia.

The jurors, including Terry Lyle, principal of the school at St. Mary’s, needed only a few minutes to deliberate. But before they could announce their decision, Anderson ran to the front of the courtroom with her surprise evidence. The video showed Anderson pushing a food cart into the Atrium, accidentally knocking some pudding onto the floor, then scurrying off when an announcement summons her to another part of the building. 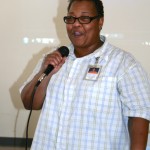 Crystal Anderson, who manages the kitchen at St. Mary's, had a confession.

“I was so busy rushing around that day … that I dropped the pudding,” Anderson told the court, adding, “Thanks for taking the rap for me, Isaiah.”

Learn more about the school program at St. Mary’s here.