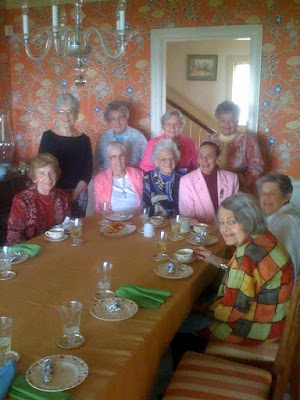 William C. Giermak, CEO of St. Mary’s Home for Disabled Children, likes to joke that 2009 is the “Year of Sister Mary June.” She’s been getting some — very well-deserved — attention since celebrating the start of her 50th year with St. Mary’s Home back in February.

An article about Sister Mary June Morin that appeared that month in The Virginian-Pilot has led to a half-hour program about Sister that is expected to air on WHRO, Hampton Roads’ public television station, later this month. Elsie Duval, a member of a women’s group from St. Andrew’s Episcopal Church in Newport News also read that article with interest. She invited Sister to speak to the group and share lunch with them, and Sister did so on Monday.

Sister told the group that she knew in the sixth grade that she had a calling to become a nun. She joined the Daughters of Wisdom right out of high school and spent seven years working at a children’s clinic in Brooklyn before being sent to Norfolk. “If help was needed, that’s where you went,” she said. Decades later, Sister is still dedicated to helping the children and young adults who call St. Mary’s “home.” You can read more about Sister in the spring issue of St. Mary’s newsletter, The Guardian, on our website.

Thank you to the St. Andrew’s women’s group (shown here with Sister, who is seated second from the left) for your hospitality and your gift to St. Mary’s Home in Sister’s honor.